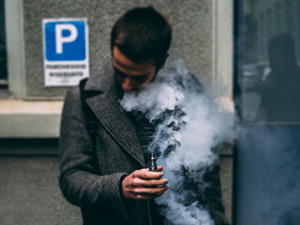 In a puff of smoke, vaping has become a worldwide phenomenon. As more dimly-lit electronic cigarette stores set up shop across Montreal, Concordia University Health and Exercise Science masters students, Tasfia Tasbih and Florent Larue, aim to demystify the consequences of using e-cigarettes.

“People have the notion that [an e-cigarette] is really safe and that it’s not harmful like a regular cigarette, but it actually is,” Tasbih said. “Any amount of nicotine consumed is harmful. Smokers may not feel the impact today, but what I have found is that these products will gradually drag you toward addiction and different negative physiological responses.”

Some users misguidedly believe that vaping is more effective than conventional treatments to stop smoking altogether. However, there is no evidence of its harmlessness. The World Health Organization has consistently called for a regulation of e-cigarettes because of the lack of literature, and this past June, San Francisco became the first U.S. city to ban the sale and distribution of e-cigarettes.