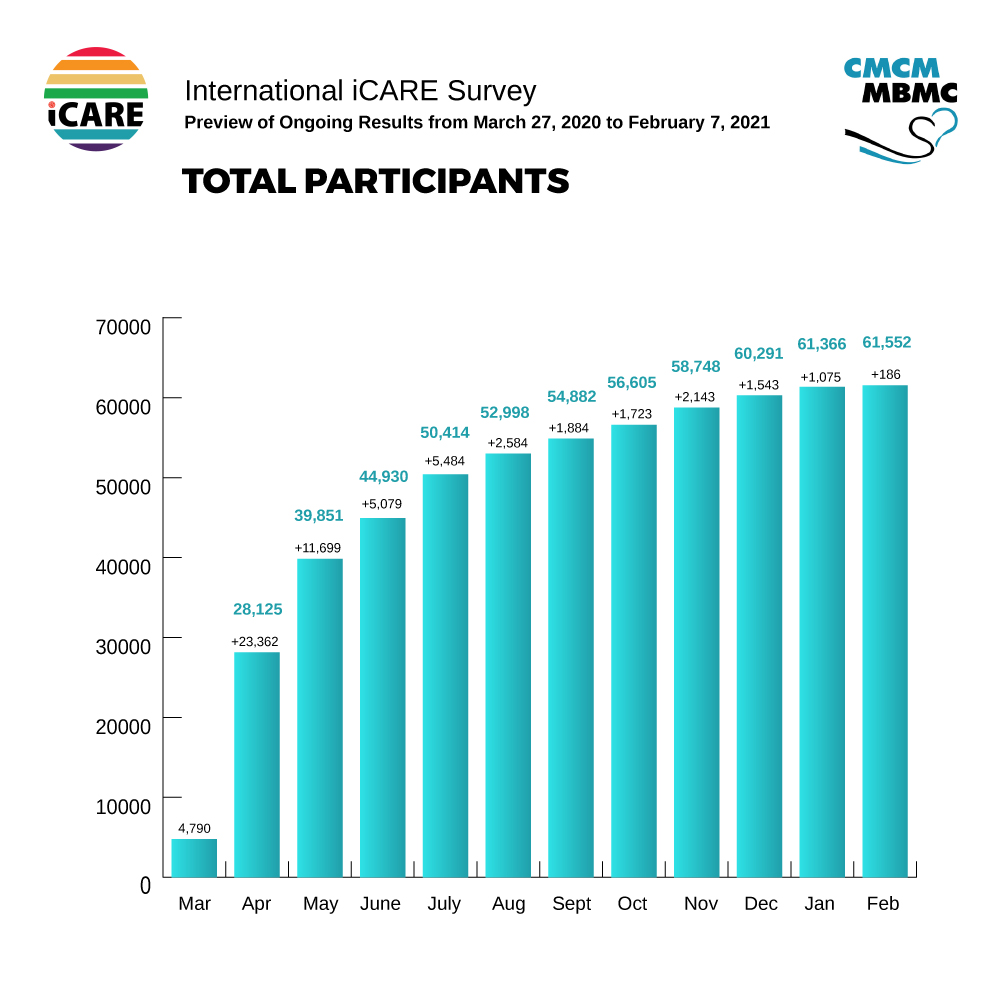 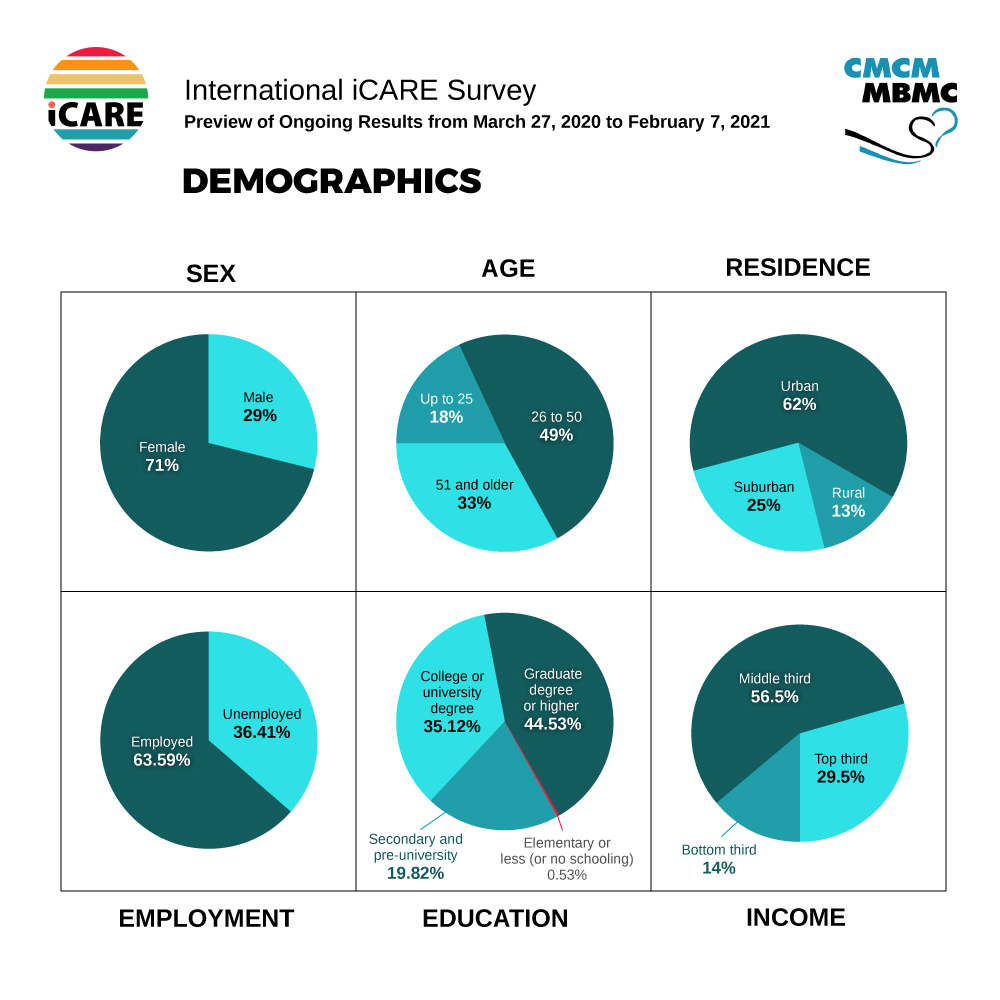 The iCARE survey’s respondents are largely women between the ages of 25 and 50, employed, living in urban settings with a college- or university-level education (or higher), and earning an income in the middle third of their respective countries.

Results also show that respondents became less and less engaged with avoiding gatherings between March and September. This behaviour has been back on the rise since October, including a sharp increase in January.

Engagement with hand washing and physical distancing has been slowly rising since September. 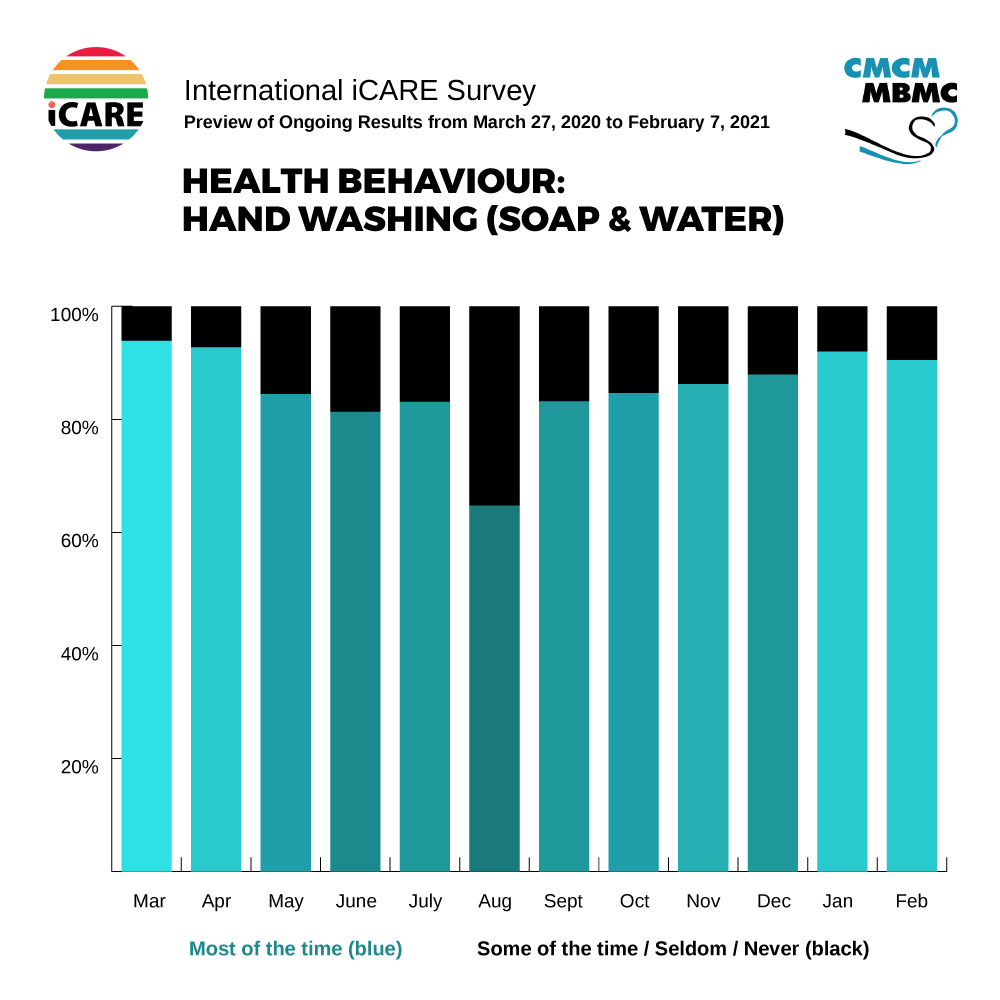 Hand washing is one of the key health behaviours recommended by the vast majority of health authorities around the world. In places where access to water is reliable, this health behaviour has been widely adopted, with an average of 85% of all respondents engaging in it “most of the time” between March and February.

Results show a consistent decrease in engagement between March and August, but we see clear re-engagement from September to early February, bringing overall engagement back to what was seen at the outset of the pandemic. 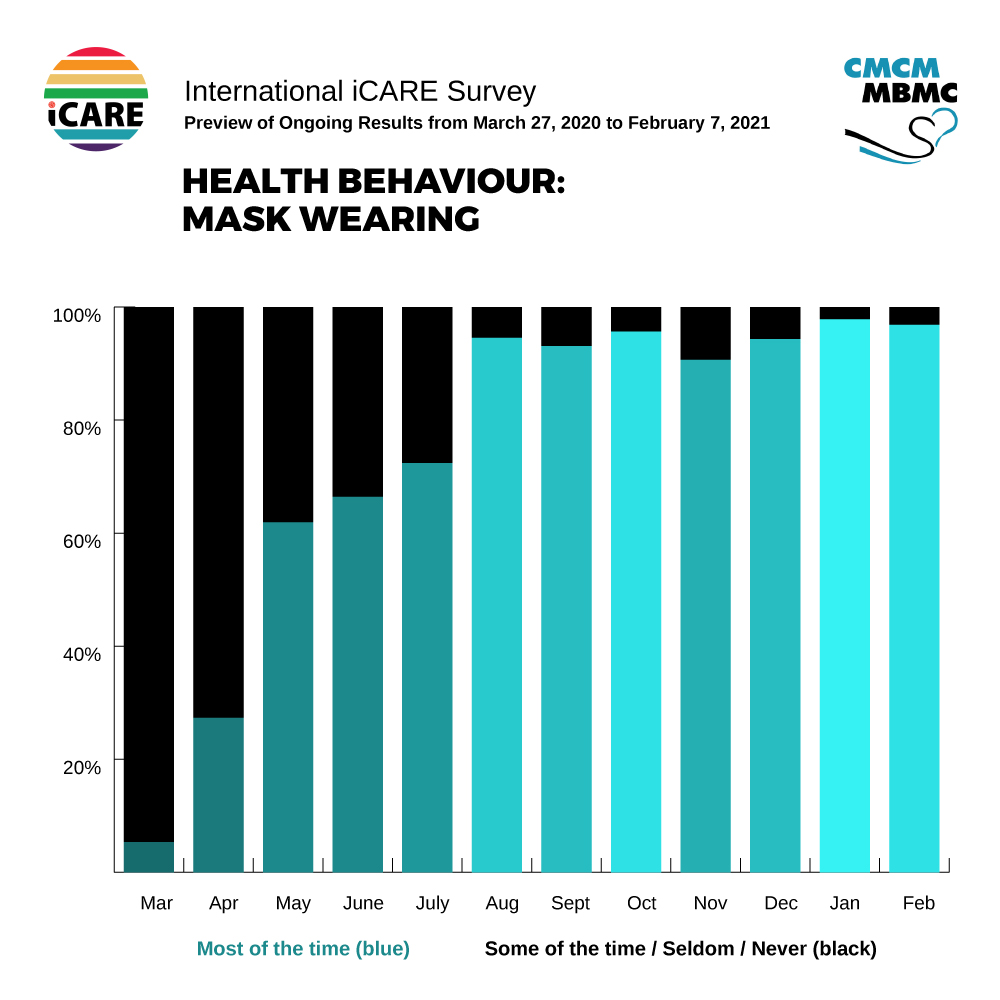 Mask wearing is now one of the key health behaviours recommended by many health authorities. It was not initially recommended but as health authorities began to talk about its importance — and as it became more and more mandatory in different settings — engagement rates soared month after month, markedly in August and peaking in October.

Despite a small decrease in engagement in November, engagement levels were at their highest in January and this was maintained in early February. 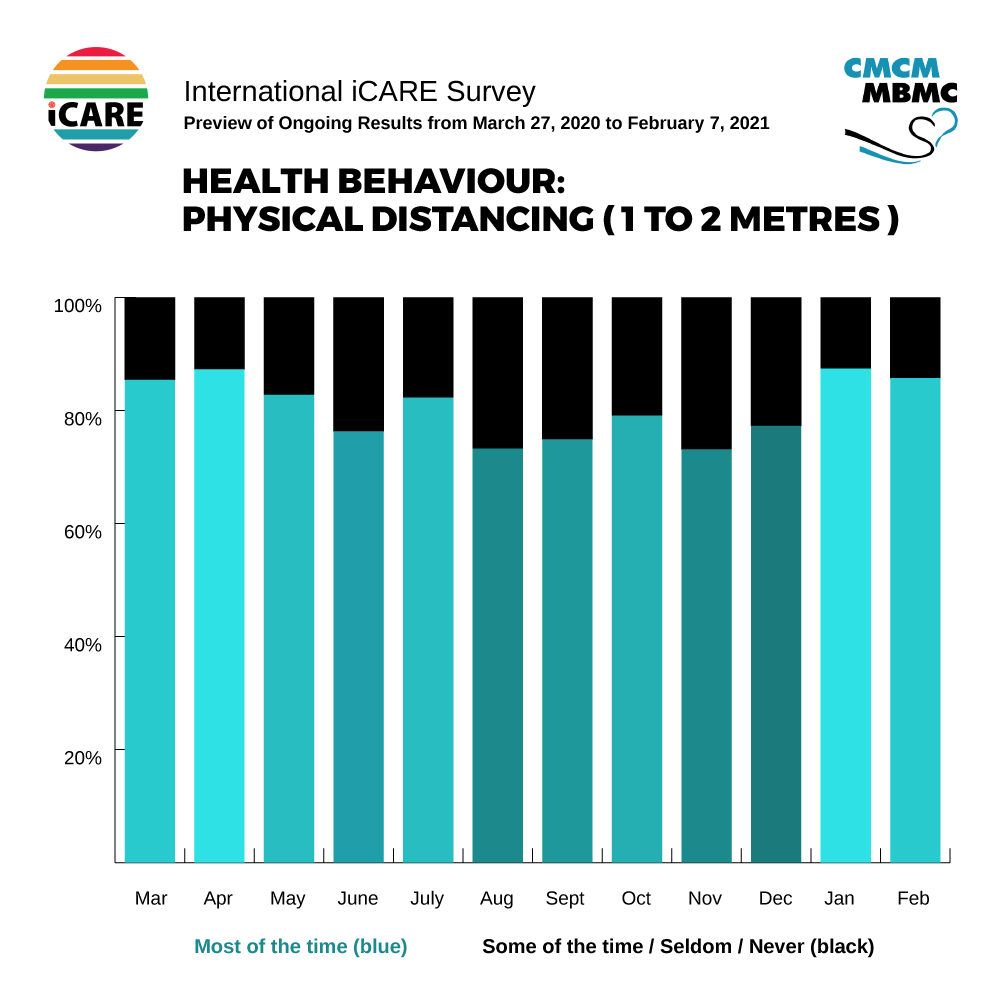 After seeing engagement levels wane between August and December, engagement with this behaviour has been on the rise since January, back to levels seen at the outset of the pandemic. 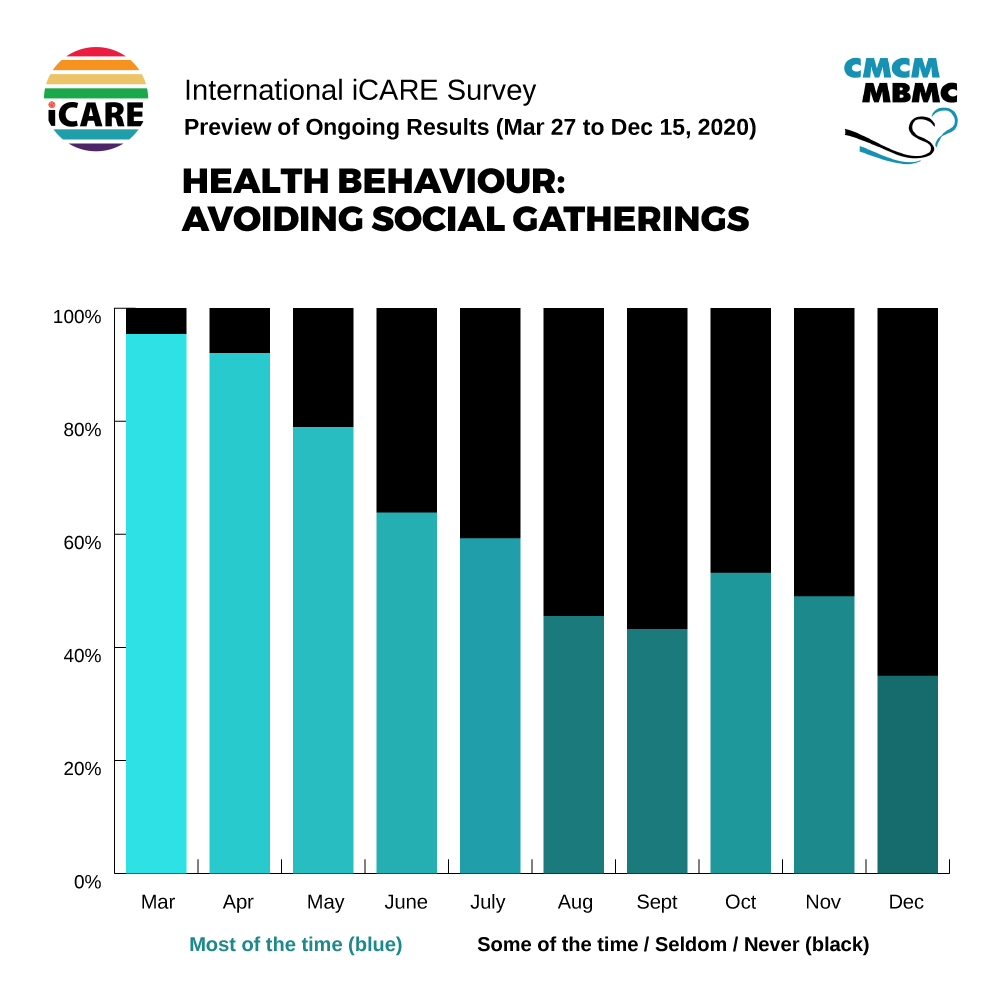 Avoiding social gatherings is a health behaviour that is overwhelmingly not instinctive. Engagement with this behaviour has been visibly challenging and seemingly untenable for respondents over the long term.

With an initial engagement rate over 95% in March, results show that engagement consistently decreased between May and September.

Small signs of reengagement were seen in October and November, but engagement reached another low in December with less than 35% of respondents engaging in it “most of the time.”

Engagement levels rose to just under 80% in January but dropped again to 53% in February.

A comparative view of disengagement levels with these two key health behaviours reveals a monthly sawtooth trend between March and August.

Results show much more disengagement from post-travel self-quarantines between September and November.

This trend significantly changed in December and again sharply in January. However, disengagement rate rose again to nearly 25% in February.

SELF-ISOLATION IF INFECTED OR SYMPTOMATIC

Disengagement rates for self-isolating if infected or symptomatic declined slightly but stabilized between September and December, with a sharp decline in January with less than 5% of respondents reporting not self-isolating. Though disengagement rose again in February, it remains lowest to date at just under 9%.

Reminder that whereas other health behaviours focus on prevention and self-care, self-quarantining and self-isolation are relatively altruistic health behaviours. It should be noted, however, that socioeconomic factors can make these behaviours unfeasible for some. 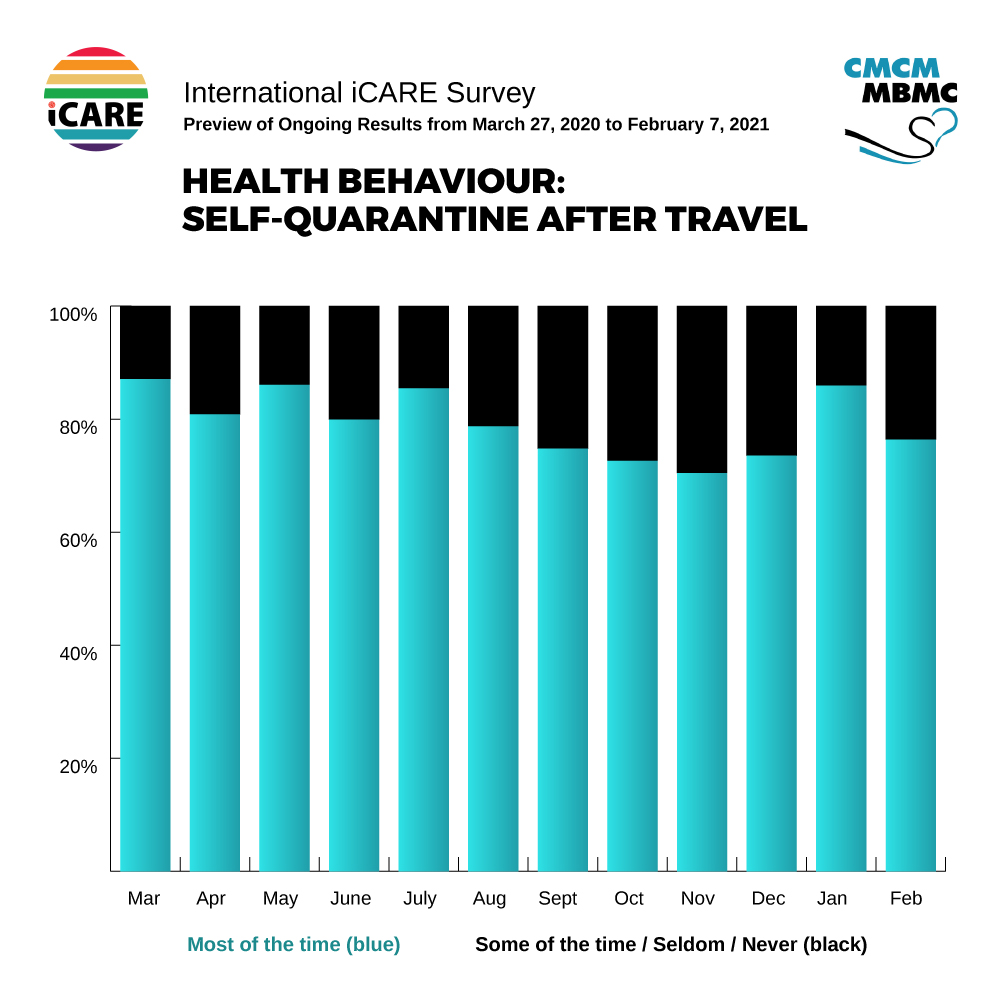 Rates of engagement with self-quarantining “most of the time” after travel remained relatively stable over the year.

Results show a slow decrease in engagement between August and December. This was followed by a sharp increase in January only to return to 76% in February, still below the overall yearly average of 79%. 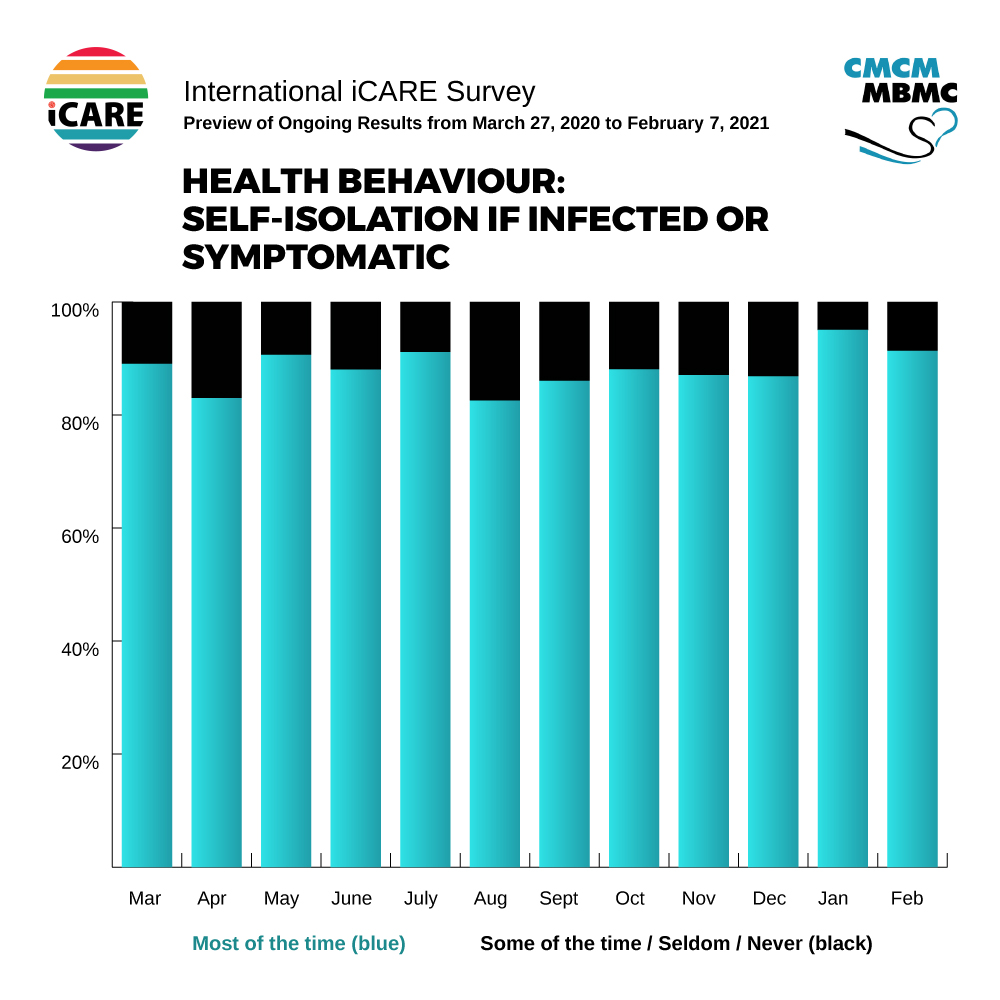 Rates of engagement with self-isolating “most of the time” if infected or symptomatic were relatively stable between March and December.

Engagement with this behaviour rose in January and February, bringing the overall average engagement since the onset of the pandemic to 88%.

However, what remains is an average of 12% of respondents not self-isolating if infected or symptomatic, with the highest rates of disengagement seen in April and August (17%), nearing 1 in 5 respondents.