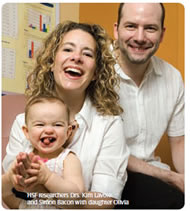 The two co-direct labs at the Montreal Heart Institute and the Hôpital du Sacré-Coeur de Montréal, where they focus on the impacts of psychological and behavioural factors on chronic disease development and progression – mainly heart and respiratory disease.

“Our studies overlap,” says Dr. Bacon. “Kim is a psychologist and I come from a physiological background, so we complement each other.”

In more ways than one. They’re also a couple, married since 2004. How does their personal partnership affect their professional one? For the better, they both say.

“There’s a deep underlying trust,” says Dr. Bacon. “I trust Kim’s judgement, and respect her opinions. Academically, I would anyway, but there’s another level to it. Our natural tendency is to be collaborative.”

“I have my best collaborator right here,” add Dr. Lavoie. “We both love what we do and have a common vision of the work. It helps the research, because we both care about it so much. It’s almost like a family business.”

If that’s the case, the Heart and Stroke Foundation is like extended family. Both doctors feel strong ties to the HSF community,a s HSF-funded researchers. Both were also reviewers for Coping with Stress, one of the Foundation’s most popular booklets.

Dr. Lavoie serves on the heart and Stroke Foundation of Canada (HSFC) scientific review committee, while a study by Dr. Bacon investigating anxiety disorders, depression, and their links to high blood pressure was featured in a news release from the 2008 Canadian Cardiovascular Congress, which is hosted by HSFC and the Canadian Cardiovascular Society.

“Everyone we’ve dealt with at the Foundation has been exceptionally warm and gracious,” says Dr. Lavoie

The path to the union had a “same time, next year” feel to it, set against the not-quite romantic backdrop of the annual scientific meeting of the American Psychosomatic Society (APS).

The couple met in 2001 when Dr. Bacon, from England, and Dr. Lavoie, from Montreal, were both presenting at the APS meeting in Monterey, California. “We were doing similar research,” says Dr. Bacon. “Kim was presenting before me, and I had questions for her. We got on well.”

Dr. Lavoie gave Dr. Bacon her e-mail, but it was, inadvertently, the wrong address. “All my e-mails kept bouncing back,” says Dr. Bacon.

The two didn’t re-connect until a year later, at the 2002 APS meeting in Barcelona. By then, Dr. Lavoie was recently out of a relationship, and not interested in “fraternizing,” she says.

So fast forward another year. By 2003, the two had post-doctoral posts, Dr. Lavoie in Montreal and Dr. Bacon in North Carolina, where he became great friends, coincidentally, with a friend of Dr. Lavoie. The three of them planned to attend that year’s APS meeting in Phoenix together and travel to the Grand Canyon and Las Vegas in advance.

At the last minute, the mutual friend pulled out due to a job opportunity. So Drs. Lavoie and Bacon, although they still barely knew each other, carried on with the trip together. “We just hit it off – and he proposed two weeks later,” says Dr. Lavoie.

Last year, they collaborated on another important project, a daughter named Olivia, born in the spring of 2008.

“Because we go to a lot of the same events, we bring Olivia with us,” says Dr. Bacon. She’s been to about 10 research conferences or meetings, starting at six weeks old.

In fact, Olivia even had a special badge made for her when she tagged along at, where else, the most recent APS meeting in Chicago. It figures – just a year old and she is already immersed in the ‘family business’.